XI Soil Education Symposium (XI SBES) will be promoted by the MidWest Regional Nucleus of SBCS and carried out by the Palmeiras de Goiás Unit of the State University of Goiás (UEG), in partnership with the State University of Grande Dourados (UFGD) and other institutions.
The event will be held in a fully virtual way, between December 4th and 8, 2023, and chaired by professors Adriana Ribon (UEG) and Paula Pinheiro (UFGD).
The Symposium will have as its central theme “Education in soils and its multiple horizons”, addressing the multidisciplinarity present in the most diverse areas, such as basic and higher education, agriculture, rural extension, urban soils, inclusion, and gender equality through the construction of the concept of soils in the form of art with paints, poetry, theaters, characters, reading stories and other recreational activities, in order to broaden the public’s gaze towards the most diverse horizons that Educação em Solos contemplates. According to the organizers, the desire is to unite those who care for the soil with their different perspectives, in order to integrate the multidisciplinary approach and reinforce that Soil Education is a necessary present and future aspiration for all generations.
XI SBES will also celebrate World Soil Day and the 75th anniversary of the Brazilian Soil Science Society. 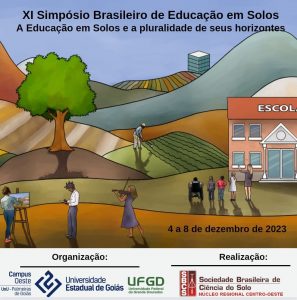